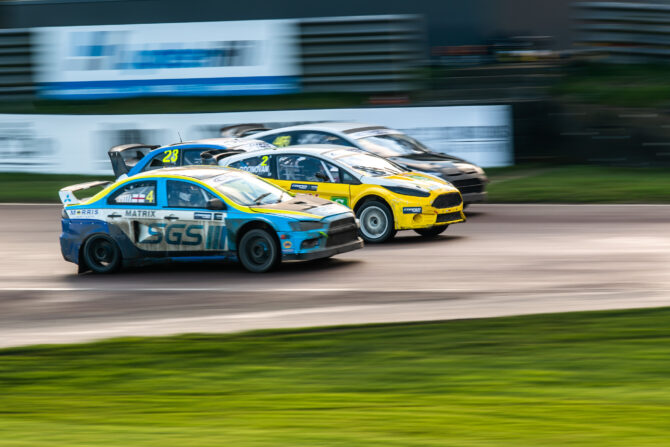 Triple Supernational Champion Tristan Ovenden returns in his stunning DS3 for a second season in Supercar, so too Mike Sellar in his similar car, alongside the experienced Welshman Roger Thomas (Ford Fiesta) and Steve Hill in his trusty Mitsubishi EVO.

Making their first outing in Supercar are reigning S1600 champion Roberts Vitols who pilots the LD Motorsport Citroen C4 – his prize for claiming the crown last year, and Irish rallyman Connor McCloskey. McCloskey will drive Ollie O’Donovan’s Ford Focus in round one but must return to Ireland for a family gathering on Sunday so will miss round two.

The MSUK Junior Rallycross Championship has attracted a strong entry, including four making their class debut. Alongside Finley Scott, Will Ovenden, Max Langmaid and James Hawkes will take to the grid in 1300cc Suzuki Swifts, joining returnees Max Watt, Corey Padgett, Caitlin May and Owen Robbins.

2019 champion Craig Lomax heads the Super1600 line-up, bringing a brand-new car into the class in the form of a Citroen C1. He is joined by the returning Darren Scott and Phil Chicken, who returns after a year in Swift Sport, both driving Citroen C2s. Completing the line-up is Belgian Nick Snoeys who brings his vibrant orange Ford Ka to the UK.

Last year’s Junior runner-up Luke Constantine heads the nine-car Swift Sport entry, joining his cousin James who finished second last year. They will be joined by Bradley Durdin, switching from BMW Minis, and his dad Terry amongst others in the line-up.

The brand-new Electro Rallycross Championship makes its first appearance with an impressive entry that sees some familiar names returning to the grid. Daniel Welch (son of John) and Rob Gibson, Dave Halford and Charlie Fraser are among those competing in the all-electric Fiat 500e class.

Reigning RX150 champion Stephen Jones will face tough opposition from three-time champion Marc Scott, who returns after a lengthy absence. They’ll both have to fight off the advances of newcomer Patrick O’Donovan though who put on a dominant display in the final two rounds of 2020.