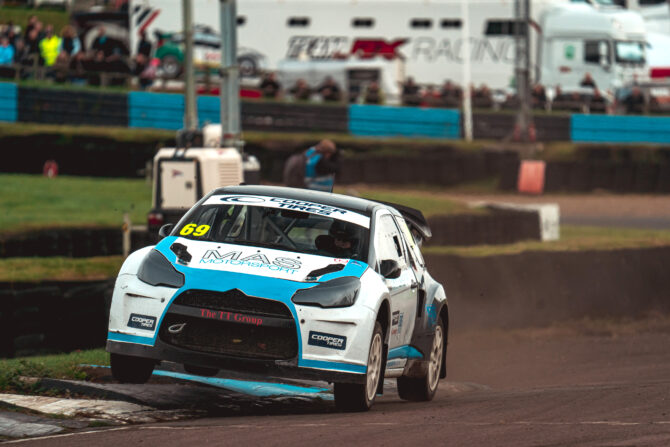 Mike Sellar has committed to a full season in the Motorsport UK British Rallycross Championship 5 Nations Trophy for 2022, and thanks to revisions to his Citroen DS3 Supercar, is hoping to climb the order.

Sellar returned to rallycross in 2020 following a 15-year sabbatical, in which he went circuit racing. Enticed back to rallycross by the lure of the 5 Nations BRX structure, Sellar acquired an ex-Alexander Hvaal, Hansen Motorsport-built Citroen DS3, but has taken time to get up to speed in the new machine.

Having previously raced a Renault Clio V6 in the Supernational category, Sellar’s first two campaigns in the headline Supercar category with his MAS Motorsport team have been about learning while racing, perfecting both his own driving, and the car.

Thanks to developments made to the DS3 ahead of the season-finale at Lydden Hill last year, Kent-based driver Sellar has eyes on moving up the grid this season, as part of a strong line-up of Supercar contenders, that includes reigning and former champions, event winners and rising stars.

“I’m planning to do a full season and hopefully we’ll go quicker this year. I love being back in rallycross, it’s great. I was circuit racing for the previous 15 years, but there wasn’t the fun in the paddock that there is in rallycross,” said Sellar. “It took me a while to get on top of the Supercar, from driving in Supernational 15-20 years ago in a Renault Clio V6, I found the Supercar takes some getting used to. But once you get the hang of it, I actually think they’re easier to drive. I must say, there’s nothing quite like it. I’ve done British GT and all sorts of things, and there’s nothing like a Supercar. It’s all about the start, and if you fluff the start, the race is gone. Last year I was struggling all year with a clutch problem, the car was bogging down all the time. It went to two or three people and it wasn’t fixed, which was very frustrating, but I took it to Gerald from 038 Engineering and he sorted it before the last round at Lydden last year and then I could mix it. Now I need to get in amongst it and see how I get on this year, but you do need to be on the top of your game too! I’m really looking forward to it, especially the French round, that is a very good addition to the championship.”

The British Rallycross Championship 5 Nations Trophy will get underway at Lydden Hill with a double-header weekend next week, April 16-18. The full entry list will be published in the coming days.