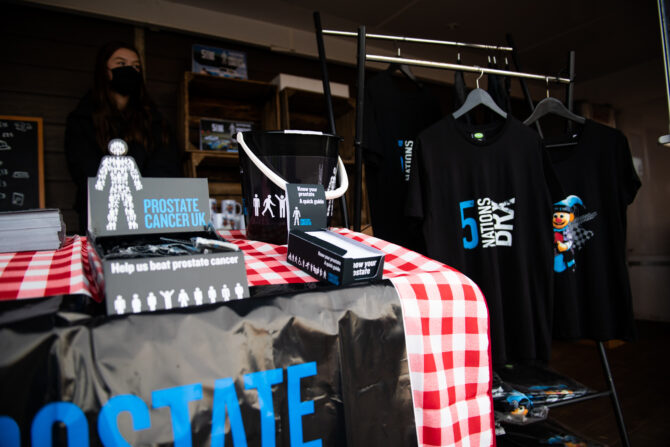 In November 2021, the Motorsport UK British Rallycross Championship (5 Nations BRX) embarked on a charity partnership with Prostate Cancer UK, hoping to raise funds and awareness for the disease which affects one in eight men in the UK. We also hope to support the charity in its mission to fund lifesaving research to improve testing, treatments, and care for those affected by the disease.

Ian Luffman-Smith is a rallycross competitor who plans to compete in 5 Nations BRX in 2023, after he’s secured the necessary competition licence. He is also one of those affected by the disease. Here is Ian’s story:

"Having been adopted I had no idea about my birth parents’ family medical history, they say prostate cancer can run in the family. My first concern that something wasn’t quite right in April 2021. My bladder flow was suddenly restricted, and I started to feel more fatigued and was getting up several times a night to use the loo. I saw my GP, who was hesitant to offer me a PSA blood test...

“However, I had a gut feeling something wasn't right, so I saw my GP again. I asked a second time for an NHS PSA test which he agreed to. After a couple of weeks my doctor contacted me to say the test showed I had an extremely high prostate level of 92. A normal level is between 4 and 6.

“The next step was to see a professor in oncology at the hospital. He did a rectal examination and said my prostate was definitely abnormal and given the high PSA reading there was a probability it was prostate cancer. The next step was to have both a soft tissue CAT scan, and a bone scan to see if it had spread. The good news was that it hadn't and was confined to the prostate. The next step was a biopsy, a very uncomfortable procedure. That confirmed the devastating news that I had stage 4 advanced and aggressive cancer.

“They said I would need radiation treatment, but before that I had to start hormone treatment. This was to stop the body producing testosterone, something which prostate cancer feeds on, and it also shrinks the prostate making it easier to treat with the radiation beam. I started hormone treatment in September via a slow-release capsule injected in the stomach. This has side effects, fatigue being the main one. You know how it feels when you haven't slept for over 24 hours, imagine feeling like that constantly, even after a good night's sleep. Other side effects include shrinking of the genitals and a complete loss of sexual appetite.

“I start radiation treatment mid-January for an 8-week course which means going into hospital daily. Each morning you must have a mini enema to clear the bowels and drink a specified amount of water to ensure the bladder is the same size prior to each treatment. So, fingers crossed they can kill off the cancer.

“As for life expectancy, I probably only have a few years left because it wasn't caught early. Unfortunately, with prostate cancer once you start feeling the symptoms it is already quite advanced. So, it is vital for men over 50, black men and men with a family history of the disease. You also have to get over the embarrassment of having all the doctors and nurses looking at your private bits. But I will battle on to the end and will not let it get me down."

Prostate cancer is the most common cancer in men with more than 11,500 dying from the disease each year – that’s one man every 45 minutes. And 47,500 men are diagnosed with it every year, 129 men every single day. Prostate Cancer UK’s ambition is to stop prostate cancer damaging the lives of men and their families by spreading the word about who is at risk via a simple 30-second online risk checker. You can help 5 Nations BRX fight the fight, by buying one of our charity calendars: https://www.askonline.shop/collections/5-nations-brx or by donating on our official Just Giving page: https://www.justgiving.com/fundraising/5nationsbrx