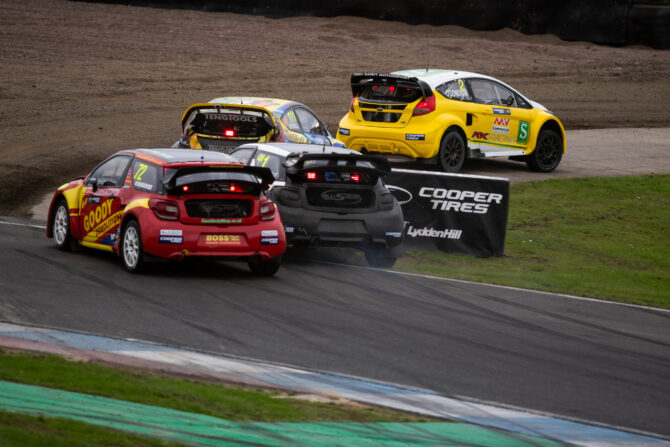 Vitols doubles up with victory in Scotland

There was action aplenty today at Knockhill in Scotland as the Motorsport UK British Rallycross Championship 5 Nations Trophy presented by Cooper Tires visited its third nation of 2021. The event saw close racing throughout the day on the championship’s first visit North since the new promoter 5 Nations BRX took over. Roberts Vitols claimed victory in round four of the headline Supercar class, while in changeable weather conditions, competitors from the other classes enjoyed an action-packed day of racing with the promise of more to come tomorrow.

Vitols (Citroen DS3) became the first driver to win two Supercar rounds in 2021. The Latvian won his semi-final but lost out on pole for the Final to Ollie O’Donovan (Ford Fiesta) who won the other. On a damp track, Vitols bogged down at the start with O’Donovan losing out to Steve Hill (Mitsubishi Evo) and then taking a detour through gravel. Hill was looking set for at least a podium after jokering but a spin dropped him down the order. Vitols, having managed to recover faced a clean track and drove his own race, jokered on the last lap and clinched victory nearly five seconds ahead of O’Donovan.

Max Langmaid won the Final on the third attempt of the MSUK Junior Rallycross Championship after two races were red flagged following dramatic rolls for Caitlin May and Corey Padgett. Such was the tenacity of May she took third in the Final with Max Langmaid taking the win ahead of Q1 winner Will Ovenden. Owen Robbins won Q3 but had a spin on the wet track and his Final ended in the gravel.

Max Weatherley took the Swift Sport win having worked hard for it. The Faversham driver led from lights to flag for five of six laps when a big accident for David Watt, James Constantine and Luke Constantine meant having to re-run the race. Take two saw him repeat his lights to flag performance with David Watt in second and Scot Don MacLeod taking the final podium spot on his home track.

Vince Bristow (BMW E36 328) looked to have thrown away his pole position in Super Retro, bagged by winning Q2 and Q3, when his start dropped him right down the order. Q1 winner Barry Stewart (Porsche 911) was leading just ahead of John Cross (Lancia Stratos) when Phil Collard (Renault 5) joined the battle, touching Stewart and sending him into a spin. Bristow pushed his way back to second then overtook Cross for the win.

BMW Mini action was dominated by Dave Bellerby who won every qualifying race, his semi-final and the final. Ben Sayer won the other semi-final but had to settle for third, being denied second place in the final by Tom Constantine who drove a great race to make up lost ground from the start.

Darren Scott (Citroen C2) won all three qualifying races in Super 1600 but an engine problem in the final ended his. Craig Lomax (Citroen C1) came through to win the round followed by Phil Chicken (Citroen C2).

Stephen Jones took one qualifying race win with Patrick O’Donovan claiming two in RX150. In the final O’Donovan lost ground at the start, recovered to second in the first lap, but it was Tommi Caldwell who won ahead of Stephen Jones after a last-lap joker, clinching victory by 0.26 seconds.