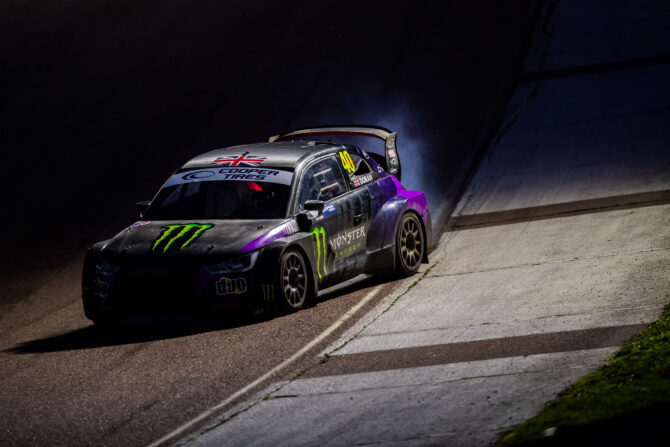 The Motorsport UK British Rallycross Championship 5 Nations Trophy Presented by Cooper Tires finally held its second round after further pandemic-related delays. An unprecedented calendar means all rounds are being held at Lydden Hill in Kent. Rounds two and three are taking place this weekend, although spectator-free due to Kent’s tier-three status. Here’s a recap of what happened:

The event marked the first Lydden Hill night race held under floodlights and saw RX Cartel’s Liam Doran win the Final after a fantastic display to finish 1.5 seconds ahead of fellow Audi S1, WRX driver and weekend team-mate Enzo Ide. Championship leading Mark Donnelly crossed the line third to stretch his lead in the standings with Ollie O’Donovan a fighting fourth. Reigning Champion Julian Godfrey retired in the final with an intermittent wiring loom issue which drops him down the standings from second.

Oli Bennett was on top form but also hit trouble with gearbox and subframe issues. John McGuinness made his Supercar debut in dramatic style with a barrel roll on his first lap in Qualifying 1 after suffering a broken driveshaft. RX Racing made a rally-style fast repair and the Isle of Man TT legend lost only one session, finishing qualifying and his semi-final.

Patrick O’Donovan took to RX150 with ease, winning every race to score maximum points. Sir Chris Hoy was second after qualifying but suffered a puncture in the Final which dropped him to fourth in the Final. Stephen Jones claimed second with Jake Harris third.

Guy Corner cornered the market when it came to Supernational qualifying wins taking all three race victories.But it was newcomer Jason Bleasdale who stormed to the flag first. The jet-ski champ took his joker on the first lap, avoiding a major battle between the pair of Lotus Exiges of reigning champion Paige Bellerby and Corner. Bellerby made a stunning move to overtake Corner and finish second.

In Super Retro, Nigel Davey won all three qualifying races but lost control of his car and the race lead before a coming together with Steve Pascoe ended both their races. Vince Bristow was the beneficiary but drove hard throughout to take the win some seven seconds ahead of John Cross and Ray Morgan.

It was a Dave-filled podium in the Mini class. Dave Bellerby took the outright win in his first race back in two years, with David Bell second and Dave Ellis third. Bellerby’s lights to flag lead translated into a relatively straightforward victory having shown great pace throughout the day. Bell now moves to the head of championship battle with reigning champion Drew Bellerby expecting her first child and electing not to race.

Three different qualifying race winners did battle in the Super 1600 Final with Belgian visitor Kobe Pauwels coming out on top. Championship leader Roberts Vitols won heat one and finished third overall. Euro S1600 racers Yury Belevskiy and Pauwels took the other qualifier victories. Pauwels managed to build just enough of a gap to take the lead when Belevskiy made his last-lap joker to record the win on his debut at the Kent track. Vitols finished third to extend his 5 Nations BRX championship lead.

The Constantine cousins reversed positions from Round One in Swift Sport, with Tom taking the win and James in second. James Phillips was on track for third until a mechanical issue halted his charge handing the position to James Chisman.