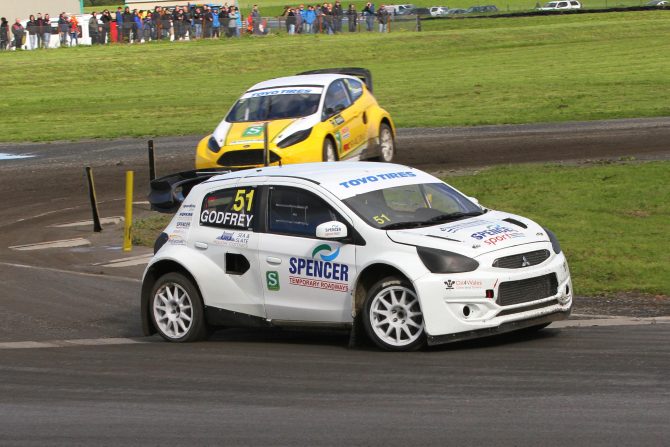 Godfrey started second on the grid for the final and took the lead at the start to head the field from lights-to-flag and claim his third win of the season.

Higgins recovered to run fourth on lap one behind Godfrey, O’Donovan and Tony Bardy (Scotch Corner) and took an early joker lap. He would climb to third when Bardy took his joker on lap four, but at the front Godfrey and O’Donovan were able to take their respective jokers and maintain track position, Godfrey claiming victory from O’Donovan by just over three seconds.

The three Pembrey podium finishers are the three drivers who will battle it out to become the 2018 British Rallycross Champion in the season finale at Silverstone Circuit on November 4.

As the final round’s score must be counted, each driver has now dropped their worse two scores from the first eight rounds of the year, meaning O’Donovan leads the standings by four points from Godfrey, with Higgins another point further back.

“It was a bit of a fight in qualifying but for the final I got an almost perfect launch. I got it just about right with the RPM, made an absolutely brilliant start and from there I just kept it neat and tidy with no mistakes,” said Godfrey. “It’s really close in the points, that makes it very exciting and I’m looking forward to going to the final round at Silverstone.”

Bardy finished his first event of the year fourth ahead of Steve Hill (Thame), who had to fight back after a slow getaway. Liam Manning (Carmarthen) and Nigel Burke (Carmarthen) enjoyed a close fight for sixth, Manning claiming the position. His father Mike (Carmarthen) debuted a new Ford Fiesta Supercar in the event but was hampered by power steering and boost issues and didn’t make it further than practice.

Paige Bellerby (Northallerton) had set the fastest time in Q1 and Q2, but a spin in Q3 dropped her down the order as Ovenden took pole for the final, from where he won the race to the first corner with his Renault Clio V6 and led from lights-to-flag. Bellerby climbed to second on lap one as Jack Thorne (Umberleigh) took an early joker but Bellerby would spin on the loose section on lap two, her Lotus Exige getting collected by Paul Coney’s (Dartford) Vauxhall Corsa, forcing him to retire.

As Thorne climbed back up to second, where he would finish to also claim the Super1600 Rallycross Championship spoils, both Scott Singleton (Ireland) and Craig Lomax (Nottingley) retired during the race, allowing Bellerby to climb back to third by the finish.

“It really was a struggle for us with the wet conditions in Q1, I was scratching my head a bit and we changed a few things on the car, but we were expecting the circuit to dry up and it did,” said Ovenden. “We were back to what we knew and the car was good again. I’m really pleased with how this season has gone, we didn’t win at Silverstone in round one but we’ve made a bit of progress with the car so I’m looking forward to that challenge and hopefully we can have a good result there.”

Luke Constantine (Richmond) moved into the lead of the MSA Junior Rallycross Championship standings by a single point by claiming victory in round eight at Pembrey.

It was his older brother, Tom Constantine (Richmond) who led the final from the start and opened a commanding lead in the opening laps, but his single-make 1300cc Suzuki Swift would run into gearbox problems on lap four. Having taken an early joker, Luke moved into the lead when Tom took his joker on lap five, the former race leader then getting passed by both Patrick O’Donovan (Iver) and Marius Solberg Hansen (Norway) for the final podium places. However, following the final Tom Constantine was elevated back to third following a three-second time penalty for Solberg Hansen that dropped the Norwegian driver to eighth.

“Tom was miles out in front, I probably wouldn’t have got him if it wasn’t for his mechanical issues but that’s just how it is sometimes,” said Luke Constantine. “I got lucky, but he will come fighting back at Silverstone I’m sure. I had a good Q1, got spun in Q2 and missed the joker lap in Q3 so it’s been eventful today but I’m happy to get the win.”

Reigning Swift Sport Rallycross Champion Simon Ovenden (Canterbury) won the eighth round of the series at Pembrey, but second place was enough for Morgan Bailey (Lincoln) to extend his points lead and claim the 2018 crown.

Bailey survived a sideways first corner moment to run second throughout the race and cross the critical 30-pooints threshold ahead of the season finale at Silverstone. Even if Bailey fails to score at the final round, he cannot be beaten to the title. Bailey’s closest challenger in the points, Tom Llewellin (Haverfordwest), retired from the final at just the second corner with engine problems, while another former Junior RX racer, Tom Middleton (Maldon) ran third early in the race but dropped behind Max Weatherley (Faversham) for the final podium spot. Christian Hainsworth (Guernsey) and Joe Booth (Maidstone) finished fifth and sixth.

Highlights of the MSA British Rallycross Championship will be broadcast on BT Sport, Motorsport.TV and online via BARC TV in 2018. Programme times will be published when available.

The final round of the MSA British Rallycross Championship takes place at Silverstone Circuit in Northamptonshire [November 4].