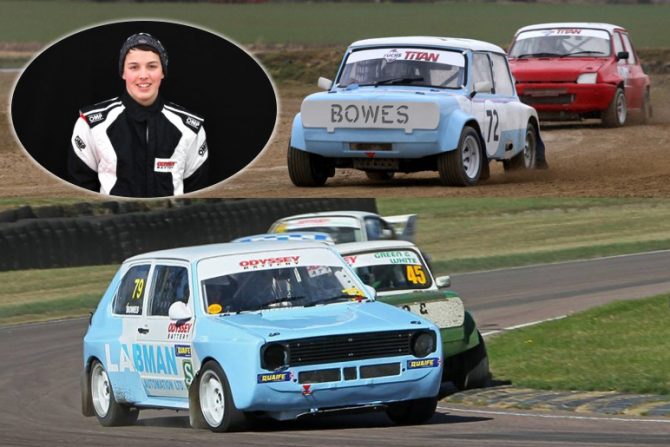 The Retro Rallycross Championship’s youngest competitor, Jordan Bowes (19), died in a road accident near his Stokesley home on Wednesday October 25.

Son of long-time rallycross driver Stewart, Bowes and his father restored a Mini Clubman to compete in the Retro Rallycross series for the 2015 season, and Bowes made his debut in the car at the opening round of the BTRDA Clubmans Rallycross Championship at Blyton Park that year, following a pre-season test at Teesside Autodrome. In his maiden outing, Bowes impressed, winning the SuperModified C final before leading the B final until driveshaft failure forced him to retire.

Jordan and Stewart shared driving duties in the Mini at various events around the UK, both competitive and in demonstrations, notably at the British round of the FIA World Rallycross Championship at Lydden Hill, while Bowes built his own turbocharged Volkswagen Golf MkI.

Working as a project leader at Stokesley-firm Labman Automation while studying mechatronics at Teesside University, Bowes engineered the Golf himself and overcame numerous teething problems to be a competitive force in the events he contested. Having travelled to the French round of the FIA World Rallycross Championship at Loheac in September, where Stewart drove in the Rallycross Legends demonstrations, Bowes intended to race in the last round of the British Rallycross Championship season last month, but was forced to withdraw following pre-event engine problems in testing.

Always smiling, Jordan Bowes was a popular member of the rallycross paddock and will be deeply missed. The British Rallycross Championship extends its sympathies and best wishes to his parents Janet and Stewart, brother Jason, his wider family and many friends.

Jordan’s friends and colleagues plan to get his Golf on track in memory of the young racer and have created a Just Giving page to help fund this. Donations can be made here.

The funeral service will take place at Acklam Crematorium (TS5 7HD), at 1330 on Wednesday 8 November and will be followed by an informal gathering at Labman Automation (TS9 5NQ) for light refreshments. Those wishing to join in this celebration of Jordan's life will be welcome. The Bowes family kindly request that you inform Retro Rallycross Coordinator Shirley Gibson of your intentions of attending to assist with their final planning.