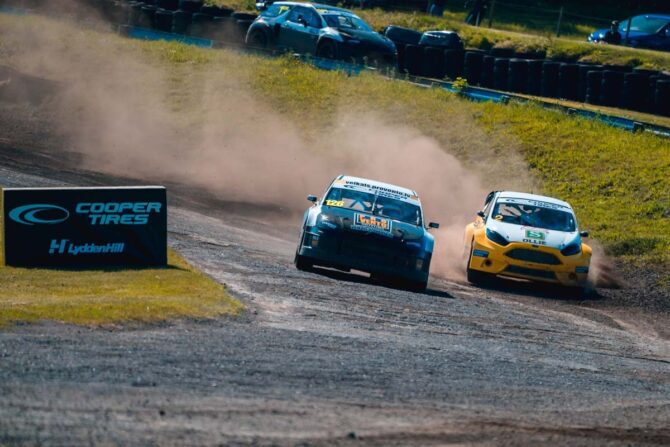 The opening round of the Motorsport UK British Rallycross Championship 5 Nations Trophy Presented by Cooper Tires brought top national level rallycross action back to Lydden Hill after a six month winter break. 100 entries, all with high-quality grids led to stunning racing, in glorious weather, in front of an enthusiastic crowd.

Jason Bleasdale brought his stunning Vauxhall VX220 home in first place after Slawomir Woloch (BMW M3), who crossed the line first, had a five second penalty applied for gaining an unfair advantage. Newcomer Ludo Hermans (Volvo S40) just got ahead of Woloch who completed the top three. Reigning champion Paige Bellerby (Lotus Exige) sadly didn’t complete any of her qualifying heats after an engine issue in practice necessitated a new motor being installed.

The under 17s produced one of the best battles of the day with every driver in podium contention at times throughout the race. Owen Robbins put aside a roll earlier in the day to surge through at the mid-point as fastest car on track and claim victory. Finley Scott and Max Langmaid were door-to-door with Corey Padgett who finished third, while Will Ovenden claimed second.

An epic close battle saw Luke Constantine win his debut senior Swift Sport event but was pushed hard by James Chisman, the pair side-by-side on the final lap. Max Weatherley was close behind in third.

Steve Harris took the lead at the start in his Ford RS200 Evo followed by Derrick Jobb (Ford Escort) and Andy Grant (Ford Focus). Grant had surged through the pack having started from the back of the grid after a jump start, passed Jobb then pressured Harris, taking the lead at the mid-point down Hairy Hill to take victory. Harris crossed the line second with Bradley Sampson (Mitsubishi Evo X) third.

John Cross led the final from start to finish in his Lancia Stratos, ahead of the full-race close battling Barry Stewart (Porsche 911) and Jos Sterkens (Ford Escort). 2020 champion Vince Bristow finished fourth in his mighty BMW.

Terry Moore (Austin Mini) took victory in Retro Rallycross beating off a challenge from Tony Lynch and Steve Cozens. Cozens (Citroen AX) initially failed to get off the line but overcame his poor start and was quickly on the tail of leader Lynch (Toyota MR2) and Moore up front. Moore took the lead into Paddock Bend and pulled away to win comfortably at the flag.

Dave Bellerby made good his promise to daughter Drew to look after her BMW Mini, and capitalised on his experience to take victory in the Final. Starting from the outside of the front row, he took an early joker and when long time race leader Bradley Turner took his, the former Supercar racer got the undercut to come out on top, with Ben Sayer finishing third.

Reigning BMW Mini RX champion David Bell took advantage of the best start in the first ever four-wheel drive All4 Super Mini final. Martin Hawkes benefitted from Bell’s joker but wasn’t able to hold him off and had to settle for second with Adrian Turner in third.

Pole sitter Darren Scott saw his hopes of victory end with a broken oil temperature sensor on his Citroen C2 even before the start. Belgian Nick Snoeys leapt into an immediate lead in his Ford Ka, as 2019 champion Craig Lomax went for the joker lap. Phil Chicken making a return to the class brought his Citroen C2 home third, behind Lomax and winner Snoeys.

Hal Ridge initially led the field of all-electric Fiat 500es, from Tomasz Wielgosz and Daniel Welch. The joker-less five lap race ultimately went to Welch in the final stages after a close battle between the trio with Ridge rounding out the podium.