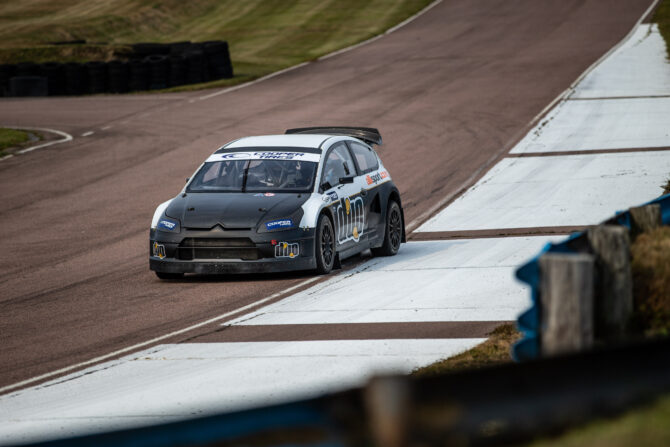 Motorsport UK British Rallycross Championship 5 Nations Trophy event-winner Jack Thorne has signed a late deal to return to the series for the opening two rounds of the 2022 season at Lydden Hill this weekend.

Thorne will race a Pat Doran-owned Citroen C4, the very car he raced against on his outing in the final rounds of the season last year, in which Thorne claimed a podium and victory in the Lydden Hill double-header.

At that event, Latvian driver Roberts Vitols drove the C4 to a race win as part of his 2021 title-challenge, while Thorne returned to 5 Nations BRX with a Peugeot 208. Now, having initially planned to have a year out of the sport, Thorne has struck a deal with the C4’s owner, Pat Doran, to make an empathic return.

Thorne contested a stage rally last weekend, the Rally Nuts Stages, in a front-wheel-drive MG ZR and won his class by over two minutes, and now the double 5 Nations BRX Super1600 Rallycross Champion joins a strong field of 14 competitors in the headline Supercar category for season-opening double-header on April 16 and April 18, including former champions, race winners and podium finishers.

“I wasn’t going to race this year but was too tempted by Lydden not to try and do it, and managed to do a late deal with Pat Doran to drive the C4. I’ve never even sat in it yet, I know it’s obviously a bit older than the cars I’ve raced in rallycross recently so it’s going to be different. I can’t afford to take any risks, but nevertheless we’re going to do the best we can without being stupid,” said Thorne.

“Up until last year I hadn’t raced a Supercar since 2019, so compared to the Supercar events I’ve done before I actually have some recent experience, but like I said I’ve never driven the car and it will be very different to jump into it from the MG I drove last weekend. But, I’m sure I’ll be able to adapt and we’ll see what we can do. To be realistic, making a final will be a good start, but of course I want to get the best result we can. Once you’re in the final it’s anyone’s game!”

The full entry list for the Lydden Hill event will be released tomorrow (Wednesday 13th April) ahead of the pre-season media and test day on Thursday.