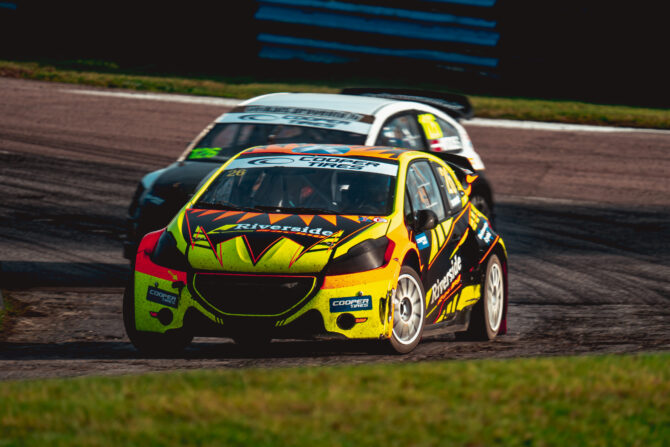 Series returnee, double Super 1600 Champion Jack Thorne (Peugeot 208) took a superb victory in round six of the Motorsport UK British Rallycross Championship, after a dominant performance across the qualifying races. However, it was multiple Irish Champion Derek Tohill (Ford Fiesta) who finished second to the non-registered Thorne to leap to the top of the standings, three points ahead of early series leader Ollie O’Donovan (Ford Fiesta).

Jason Bleasdale (Vauxhall VX220) claimed the Motorsport UK Supernational Championship victory after a dramatic final that saw his two main rivals Slawomir Woloch (BMW E3) and Paige Bellerby (Lotus Exige) collide on lap five. Bleasdale had been the man to beat all weekend and went into the Final having won three of the four qualifying races. The incident caused a red flag situation and at the restart he romped away to win from outgoing champion Bellerby.

Max Langmaid made good his early season promise of being the teen most likely to lift the Motorsport UK Junior Rallycross Championship title, with another strong finish to his weekend. Max Watt came through to take second with Owen Robbins third.

Max Weatherley was another who dominated once again, taking victory in the Swift Sport Rallycross Championship round finishing ahead of Luke Constantine, winner of two of the thrilling qualifying races, and Tom Ovenden, winner of the fourth.

The event marked the final rounds of all the Retro Rallycross classes and the Super Retro Final provided one of the best races of the weekend with a bumper entry thrilling the crowds. Jos Sterkens took the win but it was championship regular Barry Stewart in his iconic Porsche 911 that claimed the crown with a consistent performance across the weekend.

Reigning Retro Rallycross Champion Steve Cozens took the honours in the final, narrowly beating Terry Moore and championship contender Tony Lynch. The title battle went down to the wire with Simon Hart bringing his stunning Ford Escort to the top of the table, just ahead of Lynch.

Andy Grant took maximum honours once again in his trusty ex-Gollop Ford Focus to extend his gap at the top of the points table and claim the crown. He was followed home by Steve Harris in his Ford RS200 and Bradley Sampson.

Dave Bellerby was victorious in the BMW Mini RX Championship round, having topped the intermediate standings and winning his semi-final, before going on to win a fraught final. Ben Sayer came home second, with Dave Ellis Q3 winner finishing third to put him joint top with championship leader Stephen Brown.

Darren Scott (Citroen C2) gave it everything he could to wrestle the S1600 crown from main championship rival Craig Lomax (Citroen C1), winning three of the four qualifying races, and the Final as Lomax was sidelined by mechanical woes. Lomax had done enough in previous rounds to take an unassailable lead. Phil Chicken brought his Citroen home second to claim third in the standings.