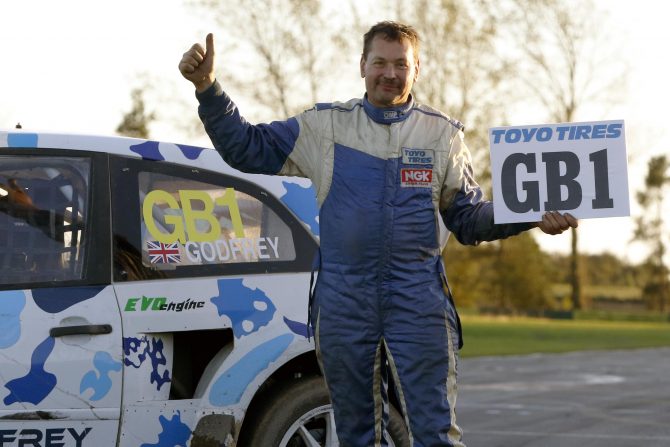 With two events packed into the last weekend of racing this year, Godfrey claimed victory in the penultimate round of the campaign at Croft Circuit to extend his points lead, then finished second to Tohill in the season finale to secure the title after two days of close racing and challenging track conditions at the North Yorkshire circuit.

With both drivers taking four wins across the campaign, Godfrey took the title by just two points, winning the Saturday event at Croft despite transmission and engine that meant his team had to work into the night to ensure he made it to the start line on Sunday.

It was Tony Bardy (Scotch Corner) who qualified on pole position in round seven (Saturday), thanks to a fastest time in Q3, as Steve Hill (Thame) had claimed the first two qualifiers with his unique Mitsubishi in an impressive performance.

Hill’s event then ended at the first corner of the final with a sensor issue, as Godfrey took the lead ahead of Tohill, before Bardy passed Tohill on the opening lap, the positions remaining static until the finish. Andy Grant (Barnstaple), Simon Horton (Clitheroe) and Steve Mundy (Ludlow) overcame the conditions to complete the top six.

Godfrey then dominated qualifying in the final round to secure pole, and while Tohill took the lead of the final at the start, second was enough for Godfrey to take the title.

“It’s brilliant to win the Championship for the sixth time. I didn’t make the best of starts in the last race so I tucked in behind Derek (Tohill), saw Tony (Bardy) hadn’t made a good start next to me so I had some space and was able to follow Derek round and play it safe,” said Godfrey. “I knew I just had to finish second, I pulled a bit of a gap from Steve (Hill) behind and just concentrated on getting to the end with no mistakes to take the Championship. It’s been a good close season, I’m really pleased.”

Hill finished third in the season finale and took third in the points, with Bardy, Horton and Mundy completing the top six. “Mad Mark” (Barnard Castle) had a torrid weekend blighted by technical issues with his Citroen Xsara on his return to the Championship.

Renault Clio V6 driver Tristan Ovenden (Canterbury) concluded his third consecutive title-winning season in the two-wheel drive category with a pair of victories at Croft, despite struggling in the wet conditions of round seven.

But, by winning the final in both rounds, Ovenden maintained his unbeaten run though the campaign with eight straight victories. Guy Corner (Northallerton) twice finished second with the Lotus Exige he debuted in round five at Lydden Hill, and at his local circuit was able to apply pressure to Ovenden for the lead in the season finale, but was just shy of a maiden win. Craig Lomax (Knottingly) finished third in round seven and secured the Super1600 Rallycross Championship title, but Paige Bellerby (Northallerton) overcame transmission issues that blighted her day on Saturday to finish third in the final in the last race of the year and beat Lomax to the runner-up spot in the Supernational Championship standings.

“It really has been incredible this season. This weekend has been really tough as well to finish it off, yesterday with all the weather and today it’s dried out, but the competition was fierce and it’s been brilliant,” said Ovenden. “It didn’t really feel like we’d won the title at Pembrey, I really wanted to do well this weekend, it means a lot to have won every round this season. The relief after it had gone well was overwhelming.”

Dave Ellis (Leeds) finished fifth in round seven, ahead of Volvo 240 driver Jelle Blockx, while David Ewin (Appleby) took fifth in the final in round eight ahead of Ellis.

Luke Constantine (Richmond) secured the Motorsport UK Junior Rallycross Championship title by a single point over Patrick O’Donovan (Iver) in the final weekend of the season.

The pair entered the finale weekend tied at the head of the standings, but while O’Donovan struggled in the early qualifying races in the penultimate round, Constantine pushed hard up front and started on pole position. While the 2018 runner-up took the lead of the final and was never headed, O’Donovan climbed from the back row of the grid to second on the opening lap to salvage his title hopes.

The pair lined up on the front row in the final round on Sunday, but it was O’Donovan who took the lead ahead of Roberts Vitols (Latvia), as Constantine dropped to third. Had the positions stayed as they were, the title would have gone O’Donovan’s way, but when he got overtaken by Vitols later in the race, the Latvian driving to his third win of the year, third on track for Constantine was enough for him to take the crown.

“I’m so buzzing, especially to win the Championship here at my home circuit in front of all my family and friends, it’s amazing,” said Constantine. “I missed a gear off the start in the final, I was so annoyed with myself and I tried for a move on Roberts (Vitols) because I knew I needed to finish behind Patrick (O’Donovan), but in the end we did enough. I know how it feels to miss out on the Championship by a point, that’s what happened to me last year so I feel for Patrick, well done to him too.”

James Constantine (Darlington) completed the podium in the penultimate round, ahead of Vitols, Ben Sayer (Northallerton) and Harry Garman (Southampton), it was Sayer, Tom Ovenden (Canterbury) and Constantine that completed the top six in the final round of the year.

Heartbreak and elation in supporting categories

Four drivers entered the final two rounds of the Swift Sport Rallycross Championship with a mathematical chance of claiming the title, but it was the driver who started the weekend fourth in the points, a little way behind the leading trio, that came away with the biggest prize.

By dominating the weekend and claiming a pair of wins at his home circuit, Tom Constantine (Richmond) secured the crown just 12 months after winning the Motorsport UK Junior Rallycross title. The title-fight went Constantine’s way when Max Weatherley (Faversham) spun out of the final in the penultimate round and the race had to be stopped, the same fate ending Dominic Flitney’s (St Ives) title hopes in the final round. Then, when Will Layton (Banbury) was forced off circuit in the last final of the year and dropped to the rear of the field, victory for Constantine was enough for him to take the honours. Ed Stallard (Worcester) finished on the podium in the season-finale.

Drew Bellerby (Northallerton) had a weekend of mixed emotions at her home circuit, when her hopes of securing the BMW Mini Rallycross Championship took a significant blow in the penultimate round, which she failed to finish the final with a technical issue and title-rival David Bell (Ferryhill) claimed victory. However, the tables turned in the final qualifier in the season finale, when Bell was forced to stop with an engine failure. His team changed the engine in record time to get him to the grid for the final, but a misfire ended his chances and while Bellerby stormed to victory, Bell finished a distant last. Bellerby claimed the crown.

Chrissy Palmer (Chichester) secured a fifth straight RX150 Rallycross title in the penultimate round of the year, finishing ahead of debutant Sam Clennell (Richmond) and Steve Harris (Hullbridge), while in an impressive first ever race weekend Clennell scored victory in the season finale, ahead of Brett Harris (Hawkwell) and circuit racing ace Max Coates (Scorton).

Gary Simpson (York) won the final round of the Retro Rallycross Championship on Saturday to maintain his unbeaten run and claim the crown. Tony Lynch (Wigan) finished second for the second event in a row, while Brian Hardman (St.Helens) completed the podium ahead of the returning Ray Morgan (Hastings).

Highlights of the Motorsport UK British Rallycross Championship are broadcast on BT Sport and online via BARC TV and the Championship’s Social Media channels in 2019.