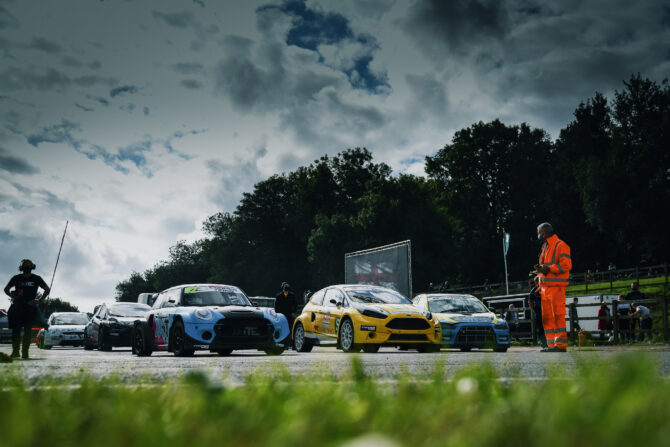 The Motorsport UK British Rallycross Championship 5 Nations Trophy Presented by Cooper Tires finally got underway at the Home of Rallycross, Lydden Hill over the August Bank Holiday weekend. After an enforced delay due to the Covid pandemic, an enthusiastic rallycross-starved crowd arrived in Kent, armed with their compulsory face coverings and social distancing guidelines, ready to watch the best rallycross drivers in action across the ten races. Here’s a recap of what happened.

Mark Donnelly claimed his first Supercar Final in his LD Motorsport Citroen DS3 after winning his semi-final and beating reigning champion Julian Godfrey by 4.25 seconds. Godfrey enjoyed a close battle with former champion Ollie O’Donovan finishing just 0.4 seconds ahead. Chris Hoy earned his first rallycross final place, overtaking Mike Manning on the last lap to make the finals. The former-Olympian finished a very credible fifth overall. Oli Bennett won all four qualifying races but was disqualified from the meeting for a fuel infringement in accordance with 3.12.2. of the Motorsport UK Championship Regulations and Article 19 of the Final Instructions.

Stephen Jones dominated the RX150 final having won all four qualifying races. Isle of Man TT legend John McGuinness finished second in the final while his son Ewan finished fourth – both on their four-wheeled race debut.

Current Supernational vice-champion Paige Bellerby won two of the four qualifying races before winning the final in her Lotus Exige. Jet-ski champion Jason Bleasdale translated sixth on the grid to take second in his first ever car race weekend in a Vauxhall VX220. Slawomir Woloch brought his BMW home in third only 0.65 seconds behind Bleasdale.

Reigning Retro Rallycross champion Stephen Cozens’ Citroen AX took the win 3.2 seconds ahead of Terry Moore in the Austin Mini. Escorts ruled in the Super Retro class with Paul Barrett and Ray Morgan finishing ahead of Gary Simpson.Four time British RX champion Pat Doran stormed to victory in dramatic style in the 4WD/GpB class in ‘Rosie’ the Ford RS200. Clawing back from a slow start he reeled in Dave Halford's Audi Quattro and Ian Flitney's Subaru Impreza, while the similar RS200 of Steve Harris had a coming together with Mad Mark’s Citroen Xsara on the opening lap.

The Super1600 class was another with a clean-sweep – this time Roberts Vitols won all the qualifying races in his Peugeot 206 before claiming the podium top-step ahead of Darren Scott and current champion Craig Lomax in a pair of Citroen C2s.

Local hero Tom Ovenden repeated his win here of 2019 at the same event, winning Q4 and then the final of the Junior category in his Suzuki Swift ahead of Ben Sayer. Luke Constantine took the first three qualifying race wins but could only finish third in the final.

The Constantine cousins James and Tom held the top-two positions throughout the Suzuki Swift qualifying races with James clinching the win in the Final. James Phillips had to settle for third in all three heats but managed to take second in the Final ahead of 2019 champion Tom Constantine.