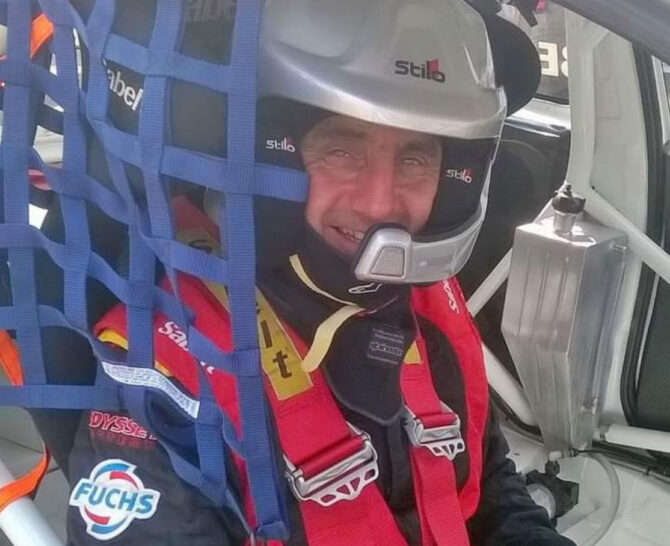 Multiple rallycross champion Dave Bellerby will return to the driving seat for the remaining rounds of the Motorsport UK British Rallycross Championship 5 Nations Trophy Presented by Cooper Tires. Dave will stand in for reigning BMW Mini Champion, daughter Drew who recently announced that she and her partner Callum are expecting their first child next year.

Former Supernational and Swift Sport Rallycross Champion Dave will race Drew’s Fuchs-supported BMW Mini at Lydden Hill next month, alongside the similarly-liveried Lotus Exige of first-round Supernational winner Paige. The five-time British champion is relishing the prospect of upholding the Bellerby family honours in Kent when the two-day event kicks off on Saturday 5 December.

“I’m very excited about becoming a grandfather, but equally delighted that I get to drive Drew’s car at the Home of Rallycross. I’m under strict instructions to look after it of course, and I’ve promised Drew I’ll keep it in one piece. It will be great to get back to competitive race action and I can’t wait. As a family we have had valuable support over the years from our long-time sponsors Fuchs Lubricants and it will be a privilege to repay their faith in us with hopefully another couple of victories apiece.”

Dave is arguably one of the most successful British rallycross drivers around. He made his rallycross debut in 1997 and overcame a front strut collapsing on his Peugeot 205 to take his first A final victory. In 1999 he won the Max Sport Challenge Championship and was crowned BTRDA overall champion. In 2002 he was second in Supermodified in a Vauxhall Nova and the following year placed second overall. Another Supermodified title beckoned in 2004 while he was also winner of the International Cup. In 2005 he built a rear-wheel-drive Peugeot 206 Mi16 Turbo, finishing vice champion in the then ‘Modified’ category.

In 2006 and 2007 he continued his success, taking consecutive crowns in Supernational, as well as finishing second in a one-off Supercar outing at Lydden Hill. He became the first driver to win a Super Final in a two-wheel drive car in 2007 at the 40th anniversary of rallycross at Lydden Hill when he powered his Lotus Exige to victory.

Dave returned to rallycross in 2010 after a short break, competing in the new Suzuki Swift Championship. Putting his learnings from the previous years to good use, he went on to secure back-to-back crowns in 2010 and 2011.

2015 saw Dave compete in select events in one of his Lotus Exiges and also race in the RX150 Championship. In 2016 he fulfilled his ambition to compete in a full season in Supercar, finishing a highly commendable fourth overall in the ex-Dermot Carnegie championship-winning Ford Fiesta 4×4.

He took a back step from competition in 2017 to manage his Bellerby Motorsport team, running cars for Drew and Paige in the BMW Mini Rallycross Championship & MSUK Supernational Rallycross Championship respectively. But the taste for success was never far away, including making a one-off outing in the British Rallycross Grand Prix at Croft in 2017 and taking victory in the Supernational finale at Silverstone in 2018.

The event this December will go ahead under Elite classification which means that although racing will be allowed, even under current lockdown measures, spectators will unfortunately not be allowed. 5 Nations BRX is working on increasing video coverage from the event, and details will be announced in due course.