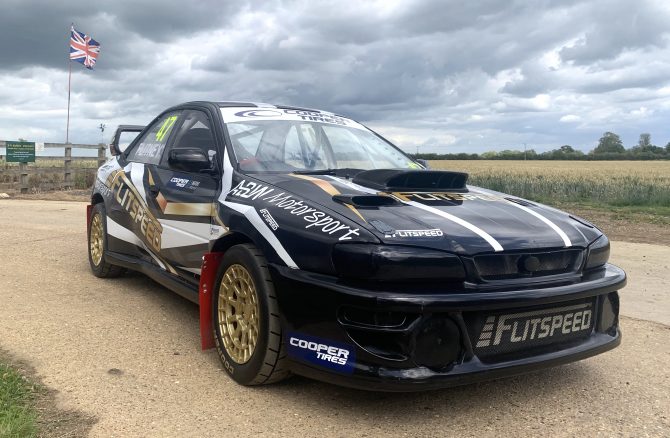 Five years ago, Dom set off for a day out with his young family to Santa Pod Raceway. An unexpected outing in an Autotest led to a call advising him he was in the fastest eight and inviting him to take part in the ‘Last Chance Qualifiers’ of the upcoming Gymkhana Grid.

A few weeks later he left Northamptonshire after finishing fourth in the Final for standard cars, competing against the likes of Ken Block, Shane Lynch and Nicolas Hamilton. On that momentous weekend back in 2015 Dom drove his road-going Subaru Impreza head-to-head against Block in his mighty Mustang who ploughed into the barriers at turn one.

Following his outstanding performance, Dom was invited to the Essen Motor Show, where he finished first in the all-wheel-drive class, and was subsequently chosen to take part at the Scottish Gymkhana and Formula G, winning one and finishing runner up in the other.

In 2018, Dom made the decision to switch to rallycross in the Swift Sport Rallycross Championship. He arrived at the opening round at Lydden Hill for his first ever competitive motorsport event and finished sixth. Last season a full campaign in the one-make series saw him take podium finishes in seven of the nine rounds, and finish runner-up just four points behind champion Tom Constantine.

“I know it’s an unusual way to come into motorsport, and it certainly wasn’t planned when I entered the Autotest at Santa Pod,” said Dom. “It started off as just a bit of fun, but it ended up giving me the bug for rallycross. I know the Subaru is not a traditional rallycross car and we don’t have 600bhp to play with like the others.

“However, it’s a car in which I feel very comfortable and I’m hoping the past two seasons in Swifts mean I’ll be able to compete with the very best in 5 Nations BRX. My father Ian and my brother Jason have worked with me to build this car, so it’s been a bit of a labour of love and as a family it’s been very rewarding. After all this time I’m now really excited to finally be going racing.”