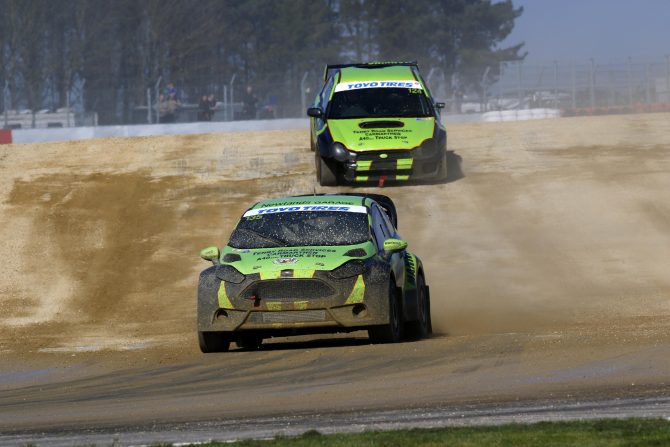 Regular British RX Supercar driver Mike Manning has confirmed he’ll be on the grid for the opening round of the Motorsport UK British Rallycross Championship 5 Nations Trophy Presented by Cooper Tires. The Carmarthen driver will use his striking Ford Fiesta in the event which takes place at Lydden Hill over the August Bank Holiday weekend (30/31 August).

“I’m very excited to be competing in Supercars in 5 Nations BRX this season,” said Mike. “They’ve got a very strong line-up entered, and a great package across all the classes with a first-rate organising team behind it. As it stands the four events in 2020 all look set to produce some fantastic racing, and after so long away I can’t wait to get back.

“I’ll be heading out to Mondello to do the IRX round there next month, so I won’t be able to take advantage of the 5 Nations BRX press and test day, but the Irish round will provide a good opportunity to not only run the car, but also to get some running there ahead of the final round of BRX.”

The first round of the revamped series sees rallycross return to its historic birthplace, Lydden Hill on 30/31 August. The Kent circuit was the location of the first ever rallycross event back in 1967 and remains a firm favourite with both competitors and fans alike. The track traditionally provides the very best of thrilling sideways action, consequently being chosen to host rounds of World RX, Euro RX and Titans RX, as well as the domestic series.

Returning to the championship after a lengthy absence, Knockhill in Scotland has benefitted from a recently re-profiled rallycross cut through, where drivers hook a right immediately after the famous Duffus Dip onto the loose. The Scottish round on 26/27 September will produce an exciting experience for visitors and drivers alike.

Round three of the 5 Nations Trophy takes place on 17/18 October at Pembrey in Wales, which in 2020 celebrates its 30th anniversary. Pledging its support to the championship, the Carmarthenshire track has undergone significant improvements ahead of this year and, like Lydden Hill, offers incredible on-track race action and spectator viewing around the circuit.

The 5 Nations Trophy then travels to Mondello Park, Ireland for the final round on 14/15 November. One of the most popular events on the calendar, competitors will be joined by the cream of the Irish Rallycross Championship across a busy schedule. The championship last visited Mondello in 2017, and remains a firm favourite, attracting massive support from the enthusiastic locals.

Tickets to the opening round at Lydden Hill on 30/31 August are now available online from: https://lyddenhill.co.uk/events/motorsport-uk-british-rallycross-5-nations-trophy-round-5/. Tickets will be restricted in number, compliant with the Government guidelines at the time of the event, so please check our social media channels for regular updates.