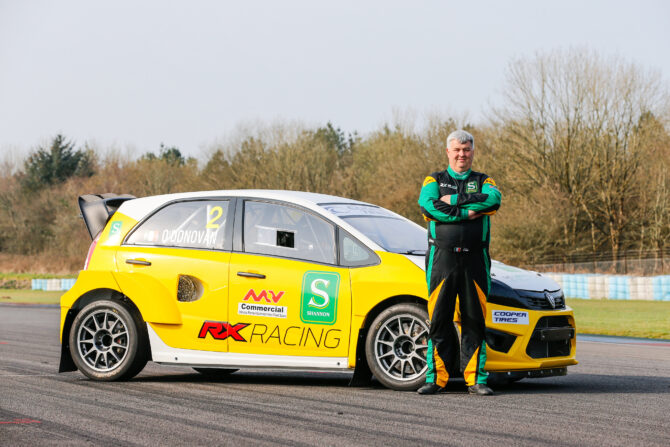 The Proton Iriz RX shares its platform with MEM’s highly regarded Iriz R5 (now Rally2) rally car, first revealed at the Goodwood Festival of Speed in 2017 and subsequently the winner of multiple national rallies. However, the Iriz RX has been built specifically for rallycross use from a fresh bodyshell. The car has undertaken initial test running, and will make its public debut at the 5 Nations BRX media and test day on April 14 at Lydden Hill.

The news comes following the announcement last week that 17-year-old Patrick O’Donovan, the reigning RX150 Rallycross Champion, will drive the Ford Fiesta Supercar that father Ollie has raced in 5 Nations BRX in recent years this season, both drivers set to line up for Team RX Racing for the full 2022 campaign.

“Seeing the Iriz RX drive out of the trailer for the first time recently was a big moment for myself and the team. Then getting in and it fitting me like a glove, was a special feeling. There has been a huge amount of hard work go into this project, and it was brilliant to conduct the initial testing at Pembrey,” said O’Donovan.

“The Iriz RX already feels like a significant step up from where we were, and in the first shakedown test we were far from its full potential. We have work to do before the opening rounds of 5 Nations BRX at Lydden, with another couple of tests planned, and I’m very excited to get the season underway. Thank you to everyone involved. I must also say, it will be a special day on April 16 when Patrick and I line up on a Supercar grid for the first time together. I’m very proud of him and his progress in rallycross so far, but I am also still very motivated to claim another British title for myself too.”