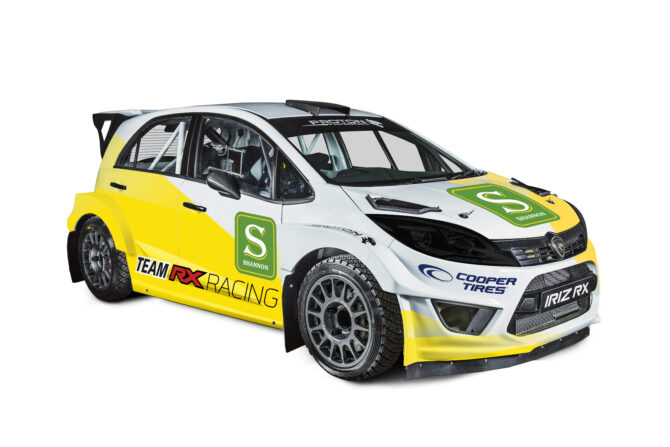 Next year’s Motorsport UK British Rallycross 5 Nations Trophy Presented by Cooper Tires will see a brand-new manufacturer enter the fray with the news that Team RX Racing will bring a Proton Iriz RX onto the Supercar grid in the hands of 2007 British Champion Ollie O’Donovan.

The brand-new car shares its base platform with MEM’s highly regarded Iriz R5 (now Rally2) rally car. The Iriz is the only R5 car in the world to be FIA homologated in both left and right-hand-drive and has undergone extensive testing with double World Rally Champion Marcus Grönholm and has won multiple national rallies.

O’Donovan will race the new car in its maiden campaign, which will be operated for Team RX Racing by Tony Bardy’s team which has successfully run O’Donovan’s rallycross Supercars for almost 15 years. The new model is being built at MEM’s facility in Derbyshire, with the support of TBM engineers.

Ollie O’Donovan: Team RX Racing Team Principal and Lead Driver: “This is a very exciting day for the whole team. The cars we have been racing in the British and European Rallycross Championships for the last few years are getting a little long in the tooth, and for some time now we have been looking at where to go next. The easy option would have been to buy a car from the World Championship, but we wanted to do something different, to stand out from the crowd. I’ve worked with Tony for a very long time now and he is one of the best in the business.

"Linking his experience of rallycross with the expertise of MEM in the cooperation we’ve put together is a hugely exciting prospect. The car is based on the successful Iriz R5, but it is also an all-new fresh build. There’s a huge amount of work to do before we can even think about the first roll out, but I already can’t wait to get behind wheel in testing, and then to race the car at some of the best rallycross circuits in the world in British, European and World Rallycross Championship events.”

Tony Bardy: Tony Bardy Motorsport Owner and Team RX Racing Chief Engineer: “We did have a different car planned to move us forward, but Ollie didn’t want to be like everybody else, he wanted to do something different. I pondered over that, but to start from scratch it would take years to build and develop something brand new. Then it occurred to me, I’ve known the guys at MEM a very long time, and the Iriz is something very different. It didn’t take us long to decide that this is the way to go, to create the first Proton rallycross Supercar.

"The team at MEM want to do this, and they’re committed to making it work. The Iriz has already done lots of rallies and proved the concept, so as long as we can get comparable power from the engine to what we have now, which I’m sure we can, I see no reason why we can’t be right where we want to be. The quality of the Iriz R5 is high, and to be involved in this new project is a breath of fresh air.”

Chris Mellors: Proton Motorsport Team Principal: “When we built the Iriz R5 originally, we had in the back of our mind that we might like to do some rallycross, so it was a bit over-engineered in some areas from the start. We’re very excited, both Ollie and Tony have vast rallycross experience and it’s great to have a collaboration for this project to see what we can achieve together.

"Although the Iriz is very short, it has one of the longest wheelbases of the R5 cars, with very good suspension travel and fabulous front geometry, from Proton’s original design. We’ve got a lot of adjustment available and we’re going to need to make some specialist components to best suit a rallycross setup, but we’re not far away already. We’ve had some very positive rally tests recently, and we’re getting stuck into the build of the new car now. We like winning and that’s what we want to be doing with this project too.”