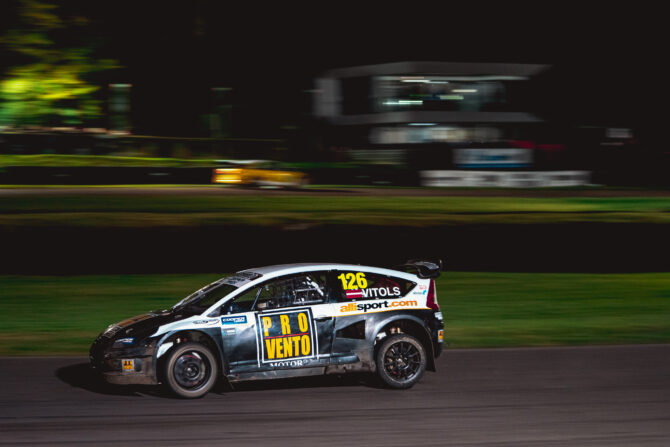 Latvian sensation Roberts Vitols (Citroen C4) won a thrilling sixth round of the Motorsport UK British Rallycross Championship 5 Nations Trophy presented by Cooper Tires under floodlights at Lydden Hill, Kent today. The reigning Super 1600 champion overcame all manner of technical issues through the qualifying, missing the second race due to a steering rack issue which required a dramatic dash for spares.

His car hastily repaired, he progressed through to the semi-finals, where he finished third in his race, to line up sixth for the Final. Pole-sitter, series returnee Thorne (Peugeot 208) was largely unstoppable throughout qualifying topping both races and then securing victory in his semi-final. Multiple Irish Champion Tohill (Ford Fiesta) finished runner up to Thorne in both qualifiers and took the second semi-final victory to earn himself a front row start.

But it was championship leader, Ollie O’Donovan (Ford Fiesta) who got the jump at the start, taking an early lead into the first corner from Tohill and Thorne with Vitols fourth. An early joker on lap two proved pivotal, as the teenager came out behind the battling trio. As Tohill and Thorne dived for the joker lap, Vitols slotted into second behind O’Donovan and when the 2007 champion took his joker, Vitols took over the lead going on to take his third win of the season. Contact with Tohill on lap five saw Irishman O’Donovan pitched into a spin, and drop down the order behind Tristan Ovenden (Citroen DS3), Steve Hill (Mitsubishi Evo) and Mike Sellar (Citroen DS3)

Round seven gets underway in full daylight tomorrow with O’Donovan holding a slender three-point advantage over his countryman Tohill with Ovenden moving into third ahead of six time champion Julian Godfrey.